In this blog post, I want to talk a little bit about Urban Decay. Urban Decay cosmetics are loved deeply in makeup circles for a variety of reasons. I happen to love them best for the formula of their eyeshadows and because they are extremely pigmented. Depending on your eyeshadow primer (which Urban Decay is almost supreme in manufacturing as well,) and the base that you apply, you can get an amazing result out of your UD shadow.

As I was tweeting about my application for the UD Pro discount in hopes that I could get some great product for my clients, a sorority sister of mine commented and told me that Urban Decay, while promoting the work of some beauty bloggers, has not been particularly encouraging or supportive of bloggers of African descent. That’s my way of saying, that if you’re black, don’t expect UD to show you any love. Now, at first, I refused to believe this because UD looks so great on black people; that’s why we buy it and that’s why we blog about it. I wanted proof before I just went in on Urban Decay on twitter, (which is my standard M.O. when I have a grievance with a company because I typically get a response.

(Have you noticed that a lot of companies take Twitter super seriously these days? Because you never know when a tweet can go viral.) I took to UD’s reinstated Facebook page, which they had to fix because they were hacked, and looked at all of their photos, out of 216 photos, only 5 black people appeared. On IG, I made a more shocking discovery, out of 469 photos posted (as of the time of publishing,) there were three pictures with black people in them and that was including the photo of the Hollywood issue of Vanity Fair that finally put Black people on the part of the cover that doesn’t get folded up. My next Instagram discovery about Urban Decay inspired the following tweet: 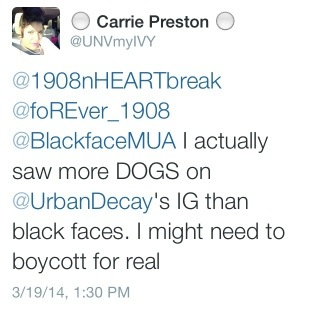 Yes, you read that right, there are more pictures of dogs, actual canines, than there are black people of any kind featured by UD on Facebook and IG combined. As of today, the company has not responded.